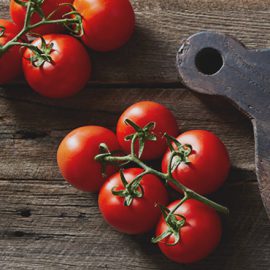 One would think that the differences between fruits and vegetables were obvious, right? Fruits are bright and delicious and hard to resist. Adam and Eve certainly couldn’t, nor could half a dozen Greek demigods! Vegetables are what kids have to finish if they want to get to the good stuff, i.e., dessert.

So what’s the real difference between fruits and vegetables? Which is which? Botanically speaking, a fruit is an entity that has seeds so technically that means that squash, pumpkins and cucumbers are all fruits! A vegetable, on the other hand, is any edible part of a plant that doesn’t happen to be a fruit, as in leaves (spinach), roots (carrots), stems (asparagus), tubers (potatoes), bulbs (onions), and flowers (cauliflower).

Seems simple? Not a chance, this is a debate that made it’s way all the way to the supreme court!

The Supreme Court Weighs In

Did you know that in 1893, in the now infamous Nix v. Hedden case, the American Supreme Court’s unanimous opinion held that tomatoes are a vegetable because people think it is! But in 2001, the European Union declared carrots, sweet potatoes, and the now thoroughly confused tomatoes all to be fruits, at least for the purpose of making jam (what is tomato jam but a sauce in a different jar?)

So it turns out this age-old question actually has an answer—it’s both! Botanically speaking, a tomato is technically the fruit of the tomato plant, but culinarily and in common use it’s definitely a vegetable as it is used in the cooking of savoury dishes. And there you have it!

Did that answer your question or just confuse you further? Comment below and let us know!

Close your eyes and think about Tomatoes, what comes to mind? Pizza, Pasta, Salad? All those are filled with Tomato goodness but the Tomato also has many great ... MORE

From Poison to Passion: How The Fruit Recovered from its Bad Rep

From American ketchup to Italian pizza to Indian curries (for that matter what would a parma or a meat pie be without it!), with its ubiquitous presence laying the ... More

We are excited to announce the launch of a new education campaign “Glasshouse Good” by Australian Truss Tomatoes, a collaboration by three ... MORE

One would think that the differences between fruits and vegetables were obvious, right? Fruits are bright and delicious and hard to resist. Adam and Eve certainly couldn’t, nor could ... More

Glasshouse good, all year round